Small and miniature aircraft, also known as UAVs (unmanned aerial vehicles), require reliable propulsion systems in order to achieve extended flight times with minimal quantities of fuel. Previously, the only option available for fuel delivery to the engine was a carbu­retor. The latter, however, is not able to provide an optimum fuel mix for all of the various phases of flight. A newly developed miniaturized electronic fuel injection (EFI) system designed specially for small combustion engines now provides the benefits of fuel injection, long enjoyed in larger engines, for small UAVs. The most striking characteristics of this system are higher performance combined with reduced consumption and considerably increased reliability. Microdrives are used to power the fuel pump to ensure the correct pressure in the fuel system. The properties required include high performance density together with low weight and superior reliability.

Research, military and – increasingly – industry, media and emergency services are using miniature aircraft, known as unmanned aerial vehicles (UAVs), for reconnaissance flights and measurements. They are considerably cheaper to purchase and maintain than manned flights. Because they are so compact, they need small internal combustion engines for power, but to date these have virtually always been fitted with carburetors for the purpose of fuel delivery. Currawong Engineering Pty Ltd from Kingston, Tasmania, Australia, is now coming to the rescue by producing miniature electronic fuel injection (EFI) systems. This guarantees an optimum fuel mix at all stages of flight, even for miniature aircraft. The fuel, which is under pressure within the system, is injected into the intake manifold using specialist fuel injectors and the fuel/air ratio is electronically controlled by a multi function electronic control unit (ECU). Auxiliary energy is required to build up the necessary fuel pressure. A high-performance, low-weight DC-Micromotor ensures consistent fuel pressure, irrespective of height, fuel levels and flight maneuvers.

Engines used in aircraft are particularly demanding when it comes to controlling the fuel/air ratio. Fuel and air will only ignite within specific limits, and the window is even smaller if the engine needs to run with optimized performance and minimum specific consumption at all times. Efficient consumption is especially important in small aircraft; every gram saved extends flight time or increases the usable load. As most miniature aircraft have only a single engine, any problems automatically result in a crash, so extreme reliability is required of all components.
The problem of aircraft engines with carburetors is the fact that the mixture is too rich at altitude if the carburetor is perfectly tuned at sea level. If the mixture is ideal at altitude, it is too weak on the ground. A compromise is always required – and this reduces performance and increases fuel consumption. The only solution is electronic fuel injection.
As the fuel is under several bar of pressure, the vaporization of fuel is ruled out even at high altitudes. Injectors spray the fuel into the inlet pipe. This allows a free, aerodynamic inlet path with no Venturi nozzles. The engine can "breathe" freely and unleash more performance. This is most noticeable at greater altitudes where the air is thinner. The amount injected is constantly recalculated electronically based on engine data such as inlet temperature, air pressure and performance required. The injection point and duration are coordinated with the crankshaft angle. In conjunction with the shape of the injectors, the pressure in the fuel system ensures extremely fine vapo­r­i­­­zation of the fuel; very small drops vapor­ize more easily than large ones to give a more consistent mixture. This guaran­tees an optimum mixture not only on igni­tion where there is practically no flow at all but also in thin air at high altitudes and at full power on the ground in thick air. Over­all, use of an injection system translates into 15 to 30 percent better consump­tion, increased performance and improved engine reliability.

Although the principle is very simple, designing an injection system for miniature engines is incredibly complex. The specialists from Australia have managed to supply engines of between 10 and 250 ccm with their compact system. The entire system consists of a number of components that can be tailored to the relevant engines. As well as the controller, the sensors for crankshaft position, and inlet and cylinder head temperature, the system also incorporates an ignition module, the injector, a fuel pressure accumulator and the fuel pump. The high-precision mechanical compo­nents weigh a total of less than 200 g and take up just 74 x 58 x 39 mm (h x w x d). The area of application of the certified components covers a temperature range of - 30 to + 50 °C and an altitude of up to 6000 m. Non-stop test runs over 1500 h and 700 h confirm the components are extremely reliable.

There is a piston pump to ensure the essential pressure build-up and a downstream pressure accumulator with pressure controller to guarantee a constant pressure of 2.9 to 3.2 bar in the system. In the fuel pump, a microdrive works with a bevel gear system on a crankshaft which powers the actual pump pistons. The 90° force transfer in the gearheads means the 27 g precious-metal commuted DC-Micromotor can be positioned behind the pump cylinder to save space. The entire pump unit measures just 65 mm in height and 22 and 34 mm respectively in width and depth. The pump is controlled by means of pulse width modulation, with the service life being more than sufficient for this application. In order to increase torque and enable optimum transfer of the 2.5 W output to the pump crankshaft, there are planetary gearheads connected downstream of the engine. The input ratio reduces 19 : 1 for a 15 mm diameter. It works in a temperature range of - 30 to + 65 °C, which is more than adequate for UAV flights anywhere in the world. The torque for the two-speed plastic gear weighing just 5 g can be up to 200 mNm.

Click to see other aviation & aerospace case studies from FAULHABER 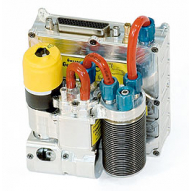 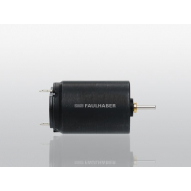