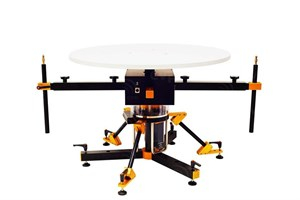 How EMS Ltd has supported the next generation of photogrammetry systems

Czech photographer Miroslav Tichy once said that photography is simply painting with light. Light Revolution, a lighting and camera system manufacturer for the film, photography and photogrammetry industry, with the support of mechatronic drive motor specialist Electro Mechanical Systems Ltd (EMS), has taken the concept of painting with light straight into the 21st century.

The Light Revolution base system comprises of fifteen main components and takes just minutes to assemble, meaning that innovative and eye-catching images can be captured in moments.

“We’ve taken the concept of painting with light and brought it straight into the modern era,” said Llewelyn-Davies. “The central hub of the base system rotates the arms and delivers power to the lights. The system also comprises of two arms with pylons to attach the lights and adjustable legs, which support the hub. There is a separate turntable complete with a 1000mm diameter circular tabletop for the object in question to be placed; ready for capturing.

“We have developed a precision engineered system that uses high quality components to ensure a smooth and seamless experience for the user — and one that captures the most wonderful images possible,” added Llewelyn-Davies.

When developing the system, Llewelyn-Davies recognised the need for high quality motors, which would enable the rotating turntable to move smoothly and effortlessly.

“It was vital that the motors we used were reliable, accurate, easy to control and offered precise timing,” continued Llewelyn-Davies. “The motors are used to turn the rotating arms in the system, which go through an internal gear in the main hub of the unit. Because of the level of quality and control we wanted to provide in our system, and in order to capture the detail of each image taken, we knew we needed a high specification motor.”

While researching options, Llewelyn-Davies completed test simulations with various motor and gear box combinations but didn’t find the fine control that was needed to match the quality system he had developed.

Further research led to FAULHABER motors, already  extensively used in other photographic systems. at which point Llewelyn-Davies contacted EMS Ltd, the sole supplier of FAULHABER motors in the UK.

“The biggest challenge for the system was the need for the turntable to spin smoothly, with extremely high levels of precision, while also maintaining the portability and light weight of the equipment as a whole.

“The FAULHABER brushless motors provide a high power, precision and are also a light-weight option, making them perfect for this use. The range of FAULHABER motors I initially suggested — the BX4 family — can control speed while providing extremely accurate levels of movement.

“By opting for a family of motors, it also meant that we were able to test the power of the motor without compromising the programming work that had already been put into developing the system,” added Walsha.

“The FAULHABER BX4 motors come in a range of sizes and power capabilities. This meant that if the first motor we suggested wasn’t powerful enough, or if Light Revolution wanted to create larger or more intricate system designs we would have been able to scale up the power of the motor without the need for a change to the core programming of  the equipment.”

“When you’re trying to introduce new technology into a well-established industry, like the photography and cinematography sector, you need to ensure that the equipment provided is up to scratch from the outset,” explained Llewelyn-Davies. “The FAULHABER BX4 motors that EMS supplied have given us the accuracy and reliability we were looking for from a motor, all while being powerful enough to turn the system with ease.

“As the motors are used across critical industries such as aerospace and nuclear power, I knew they would supply the level of precision and reliability needed for our system.

“The support that EMS provided was second to none. Being a small developer, having a direct point of contact with a member of the team that was able to suggest exactly the right motor for our system was invaluable.”

The Light Revolution system is now being used by companies that specialise in 360-degree photography and beyond. A number of renowned museums across the UK are interested in using the system to photograph artefacts and items from their collections, while universities across the country are also enquiring about the possibilities.

“There is a huge amount of potential for the system, both across the UK and globally,” Llewelyn-Davies said. “With its portable nature, it is possible to transport the system from one site to another relatively easily, meaning that there’s no need to rent expensive equipment on location or on film sets. Our system gives image capturing experts the ability to paint with light at the touch of a button.

“The support from EMS provided has been critical for the success in developing the system, which is vital for the rapidly growing and innovative industry that we are working in. We see a lot of opportunities coming up that mean we’ll continue to use FAULHABER motors from EMS for the foreseeable future.”

More information about the Light Revolution system can be found on the website www.light-revolution.com. 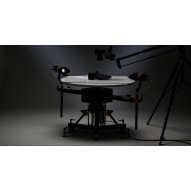