For each tong head or extension option a Change Station will be needed. The Change Station is used to both detach the tong head from the barrel and to store it, enabling a change of tong head. If more than one head is to be used in a cell then there must be a change station for each head.

The swivel base allows the cell layout to be designed with the parking bays in more convenient positions. Through the angular positioning of the change station the tong heads can still be parked in places where a flat mounted station would not allow head removal and attachment.

With the careful positioning of the change station and swivel base complete, the swivel base grub screw can be used to lock the tilt position of the assembly. The small hole in the base of the change station can be tapped and another grub screw inserted to lock the swivel, or the hole used as a pilot hole for the top of the swivel base, and locking achieved through the use of a coiled pin. It should be noted that the locking method should not interfere with the tong head change operation. 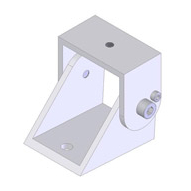 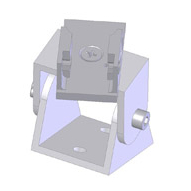 Do you have a question about this product?